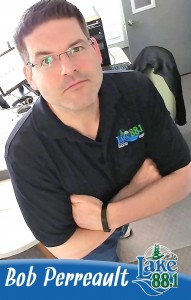 Bob has been working in radio newsrooms since 1998 when he started by working a weekend overnight shift.

He joined Lake 88 shortly after it was founded in a part-time capacity and in 2013 became the News Director after the retirement of long-time News Director Ian Sutton.

Bob strives to bring local stories from across our listening area to our listeners every day from 6 am until Noon, and enjoys filling in on Saturday mornings. He also welcomes guests daily to In Focus, our current affairs show which airs after the News@Noon weekdays and maintains the station’s social media efforts.

Bob grew up in Ottawa, but now lives in Smiths Falls with his beautiful wife of more than 10 years, Kathy. He says he will never go back to big city life, and has embraced his adopted hometown. Bob has a daughter Kristen, and two step-children, Tyler and Monica.

He also loves getting involved with local charities and is always looking for a good cause to support.

He is a self-described “super geek” who loves all things pop-culture, especially a well-written and produced movie.

Bob is also an animal lover, as his cats, Boba Catt, T-Wee, Baby Girl, and Baby Boy will attest to.