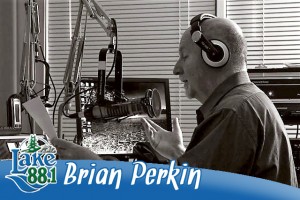 Brian is originally from Oshawa, Ontario. He is a graduate of Ryerson University in Toronto in Radio & Television Arts, and has primarily worked in broadcasting since 1972 at stations in Ajax, Guelph, Ottawa, Smiths Falls (serving 14 years as Program Director and Operations Manager) and now Perth.

In 1999, Brian took a brief hiatus from radio to teach media broadcasting at Algonquin College in Ottawa, and the following year earned his Bachelor of Education at Queen’s in Kingston. He taught high school in Sharbot Lake and at St. John’s in Perth, and worked as Communications Officer for the Catholic School Board of Eastern Ontario.

Eventually his love of radio resurfaced, leading Brian and co-founder Norm Wright to launch Lake 88 in 2007. After Norm retired in 2014, Brian and his wife Jennifer acquired full ownership of the station.

Outside of radio, Brian has coached his three sons in local minor hockey and soccer. He also serves on the Perth Festival of the Maples board and the Perth Performing Arts Committee, and acts as MC at community and charity events in the area.