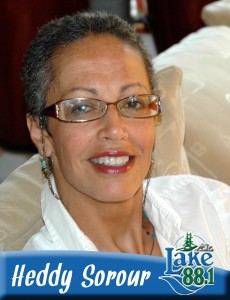 Heddy Sorour has taken the very long road back to radio. She originally started in radio drama before she came to Canada some 30 years ago.

After a career in market and social research, Heddy took up silver and goldsmithing, before heading back to school and entering the radio program at Algonquin College.

While there, she was gently nudged into print journalism and since 2005 has worked as a print reporter for a variety of newspapers and news wires. Heddy has written for several local papers within our listening area as well as in big cities, and in national publications. She has covered everything from council news, to financial news, to features and arts news.

An avid radio listener, Heddy has been secretly harbouring a desire to get back on the airwaves, so when an opportunity opened up at Lake 88, she leaped at it.

Having covered Smiths Falls council for several years, it wasn’t too hard to pick up again, although she’s finding that radio is much more fun than print! Getting to know Perth has been a joy – not just the aesthetics of the town, but the people have been incredibly welcoming.

Heddy lives in Merrickville with her husband Gary and tries to spend as much time as she can with her two fabulous grown children Leyna and Tarek.

In her spare time Heddy practises Aikido – a martial art, and struts the boards with Theatre Night in Merrickville, Smiths Falls Theatre and hopes one day to get around to auditioning in Perth.