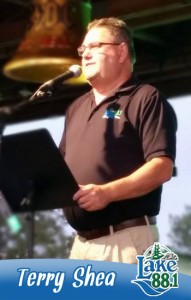 Terry Shea returned to the Lake 88 newsroom in September of 2016 after a four year absence. He’s always been a part of the family though, co-hosting the station’s popular Junior Hockey Talk since its inception.

Terry started in radio in 1978 in his hometown of Lindsay at CKLY and at CJGX in Yorkton, Saskatchewan.

He landed at CJET in Smiths Falls in 1979 and worked as an overnight announcer, and then moved to news and sports caster. He was part of Junior B hockey broadcasts as both a colour man and play by play announcer. Terry has covered junior hockey in the Ottawa Valley 37 years. His involvement in amateur sports included minor hockey, figure skating and fastball as an organizer and coach.

Terry and his wife of 34 years, Debbie are empty nesters and still live in Smiths Falls.